Yesterday was my dad’s birthday. The only reason that I remember that is because it is on Veteran’s Day. It is as if before he was born the universe knew that I would never remember otherwise.  I have written in the past at our mostly failed attempts at a normal father daughter relationship. One of my closest friends has, time and again, experienced disappointment from his dad. He finally washed his hands of the entire relationship. I find myself unable to do it. Maybe it is because I have the only grandson.  That makes me feel responsible for keeping in touch somehow. Unfortunately, this is not easy. Phone conversations are awkward and long. I have to admit that I do that HI to NY time conversion and hope that, it is too late, that the Guatemalan family he lives with won’t be there and he won’t pick up. That I can just leave a touching birthday voice mail. 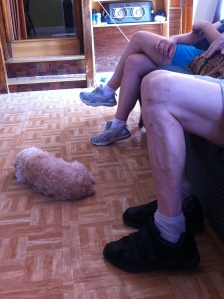 Because of this issue, with the talking, I have taken a vow, since September, to send something in the mail to my dad every month. It is so much easier. It is actually more personal. It is more personal because I control the conversation. On the phone, it is mostly my dad talking and talking. Running roughshod over the conversation. I think that because I had to deal with this for so long that I just shut down. I make the obligatory noises of agreement. It is not entirely bad since sometimes there is an actual nugget. Like yesterday when he asked me about his grandson’s ukulele playing and I told him that I was doubtful that he would ever play publicly. My dad then told me a story about him taking over the accordion playing at a family wedding back in the day when the band was butchering the polka. He said that he played two of the old time polkas, not the new ones like Bobby Vinton(!), and that the grandparents of the couple got to dance. Priceless.

What with election week and the turmoil our family experienced because of it, getting dad’s monthly mail in so that he could get it before his birthday proved impossible. Despite this, he thanked me for the card we had sent him. I got the feeling he was thinking of the one we had sent the previous month. To my surprise, he had not yet sold the house he grew up in. The last time I spoke with him, he seemed ready to clear everything out the house and sell to the neighbor in the back. None of these things have happened. Then, in our conversation, he kept, not being able to pull out the word he was looking for. In our almost hour long conversation, this happened at least three times. The beginning of the word was there but, even though I knew what it was, he couldn’t grab it. Does this mean anything? I don’t know. Hard to say. Maybe what it should mean is less mailing and more calling.