Why Am I So Far Away – The Cure: A Lovesong

I live on a big old rock in the middle of the Pacific Ocean. If you listen to what people tell you about the rock, you may start feeling paranoid what with being in the largest urban area further from any other land mass. It can make you feel small. And isolated. That’s how the night life and concert scene is here. Small and isolated. We very rarely host any big name shows (yes, we’ve had Elvis but that was before I lived here) and on even rarer occasions a band visits which I would actually pay to see. Imagine how pleasantly surprised I was when Morrissey came. We paid the exorbitant price to be able to see right up his nose. It was totally worth it. But while I loved Morrissey, he wasn’t on my short list of not to miss shows.

Then the other night my significant other, while looking at his Kindle, said, in a rather shocked tone, “The Cure is coming.” Once I believed him, my second thought was that they were going to be in town during the approximately two week stretch my family leaves the rock to go and visit my family in NY. And of course I was correct. I have to say that I went through a brief stint of denial, disbelief and depression. After ridiculously considering changing my flights so that I could be in town, I realized that I just had to let it go.

Thing is, The Cure, for me was part of a time in my life when I was changing. I had gone “away” to college. Far enough to live in the dorms but close enough to be able to drive home for holidays and weekends if I wanted to. It was pretty perfect. I had escaped my very, very white and mono-cultural upbringing which included a lot of Rush, Def Leppard and Night Ranger on the music front. Yeah, it was like that. When I went away I was exposed to so much more. To boys wearing eyeliner. To people who only wore black. To cheating accounting majors. To vegetarians and pot smokers. It was a good time. To help pay for my tuition I had gotten a job on campus. Instead of a normal office job, I was assigned to work in the greenhouse on campus. I never really understood how they got to be there. They were a commercial operation and as far as I could tell did not benefit the school in any way. I especially loved working in the greenhouse in the winter time. I would bundle up and trudge across campus in the freezing cold. The greenhouse panes were totally covered with condensation and then when the door was opened it was like transporting to a tropical climate. It was very humid and warm. Downright sweat inducing. The complete opposite to the outside.

I was mostly alone when I worked there. There were growing trays down the middle and plants lining the sides with paths that ran up and down the length of it on both sides. I would put the local radio station on very loudly and do whatever work had been left for me. I remember that it was in the greenhouse that I heard my first Cure song. It had to be about 1987 or so. I was late to the game. My first Cure song was Just Like Heaven. I remember running over to the radio because I wanted to find out who was singing this song that I had fallen head over heels for. This, in pre-internet time, unthinkable today, that if you missed any nugget of information you would be out of luck. I remember that I found out the name of the album that the song was on and asked my mom for the CD for Christmas. I was so happy to receive it. Intrigued by the cover art. Were those 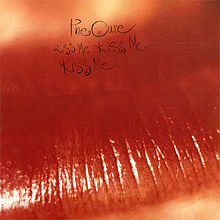 Robert’s lips? I popped it into the CD player and got The Kiss. I was unsure. Was this the same band? So angry and wonderful and angry. I played through the entire album and was in love. I fell in love with Robert Smith and his ridiculous sticking up hair, silly sneakers, giant black clothes and heavy eyeliner. I always saw them whenever I could if they played where I was living, not often but not never.

But this time, this time, my timing is off. The universe is against me and for part of the two weeks of the entire year that I leave the rock, Robert Smith will be here. Here in Hawaii. Friends have suggested seeing a show of some sort in NY but that really won’t make up for missing Robert. That being said, I feel like it was meant to be that I am to miss it. That there is something bigger in the works and that I will have a chance to see The Cure again. Wherever and whenever this happens, I will just be glad to recapture a bit of the soundtrack from the time in my life where freezing could turn to steamy in a second. And vice versa. Like magic. Just like heaven.

2 Responses to Why Am I So Far Away – The Cure: A Lovesong