I am the Spider (koo-koo-ka-choo)

I have a very complicated relationship with ants. Love/hate I would say. I never really had to deal with the critters till I lived in Thailand in a house that was pretty open to the outside which included the weather, lizards and various insects. I have written extensively about the large red ants which lived in the tree next to my house. They were aggressive and bit and I ended up with one tattooed on my leg. It was a lesson in tolerance.

My Thailand experience sort of prepared me for living in Hawaii. If you live in Hawaii and you have somehow managed to keep the bugs out of your house, I can only imagine that the entire structure is potentially wrapped in plastic. It is the only way that I can see to keep them out. I imagine that if I had a house, an actual stand alone, not sharing walls house, then I might be able to mostly keep them out. But even in that scenario there will always, maybe once a year or maybe longer, be that time when you are forced to engage in battle with a giant flying cockroach. It is just a fact. They get in. You don’t want them in. They want to fly right at your head. I am usually the one running in the opposite direction. I can’t handle.

In the apartment we just left, we had a bit of an ant issue. I tried to figure out where they were getting in because all I want to do is to keep them out. I am more than happy to share the earth with them. Just not the inside of my apartment. I don’t think that is too much to ask. I couldn’t figure out where they were entering so I learned to put the things they like away. Things like sugar, honey and candy wrappers. In the end we formed an uneasy truce.

At the new place, right outside my floor to ceiling jalousie windows, there is a stream of not so small black ants going up and down the side of the building. That’s the other thing, if the ants are small and pale colored, they are much easier to live with than if they are black and big. Anyway, in the spirit of keeping the ants out, I lined some of jalousies with ant chalk (cue heavenly music here) but they are really tall (remember floor to ceiling). Our uncle left behind this supposedly 12 month insecticide that you put where they come in to keep them out. I kind of like it because it is not an aerosol and it is not stinky. Anyway, I’ve used that around the spots that are harder to reach with the ant chalk. 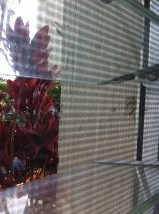 This morning when I woke up I happened to take a look at the space between the stove and the jalousies and there was plenty dead ants. Like what you see when there is a spider and it has eaten the bugs and the scooped out corpses pile up. I actually looked up to see if there was a spider web. Then I realized that they had all died due to my preventive measures. I realized that I was the spider. And as much as I feel a little guilty over the ant death, I also feel like my measures are effective. I think about all of those mediumish ants invading my kitchen and I can live with what I’ve done. And I am hopeful that this will continue to be effective and we can live in a truce like fashion. Me and the ants. Like neighbors. Koo-koo-ka-choo.

Living like the rich and famous, splitting time between Hawaii and New York.
View all posts by nematomorph →
This entry was posted in Hawaii and tagged ant chalk, ants, Hawaii, insectcide, jalousies, spiders. Bookmark the permalink.