After writing about my time spent at Borders last week, I was thinking about some of the people that I met while working there. Many, many of them honestly seemed to exist only at the store. Maybe only in the downstairs backroom where the books came in from the loading zone. They were bearded and quiet, back before hipsters were hip. Sometimes forced into managerial roles which may or may not have suited them. They were younger than me and older than me. I mostly liked them. They were a genial bunch. I worked many different shifts so I got to know the old time day guys and the younger closers. It was a good gig for me and I loved the discount.

When I worked at Borders, it was definitely a transitional time in my life. I could have easily left Hawaii and never come back. I was never one of those people who always wanted to come here. I do not have wanderlust. But sometimes things just happen. While at Borders, my then boyfriend had returned to Korea where he was studying through a program at UH. I knew when he went back that our relationship was in trouble. He had received a card from a Korean woman when he came back. He asked me to marry him and I said no. And then he left again. And he left me in this limbo. Stuck in this near seven year relationship, separated by distance, all the while knowing, in my heart that we were finished. And ultimately, as far as I know, he has never returned.

Working at Borders, I was hanging out with a younger bunch. We would drink a lot. We would go to strip clubs because they were the only bars open late enough for our tastes. 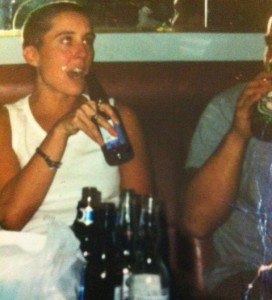 One of the guys was shortish and stocky. And bearded. He was damaged and creative. I was untethered. Living the most selfish of selfish lives. I shaved my head. Waiting to be broken up with. But before that happened, the definitive break up, which did happen, I kissed this boy. He was shy and local. I was brass and New York. We would have never worked. And maybe he was just my move to spite my ex. For the Korean woman who had the balls to send him a card. To our apartment. Which I could not read. Because it was in Korean. So this incident. This toe dipping experiment. Does it make me a cheater? And what is it they say on all of those yelling day time shows, “once a cheater, always a cheater.” And in the actual and true sense of the word, then yes, I am a cheater.

But I would like to think that I was not the cheater. Likely had been cheated on. That technically speaking, I was already dumped. Just that he had not yet told me. And maybe when feeling dumped, or neglected, or taken for granted, people just want to feel acknowledged. They want to know that they still exist. That they matter. That someone sees them. The real them. So maybe I just wanted to be seen. Wanted to be acknowledged. And that’s all. Not a cheater. Happy to be seen. Even if for a moment.

Living like the rich and famous, splitting time between Hawaii and New York.
View all posts by nematomorph →
This entry was posted in Hawaii, Relationships and tagged bald, books, Borders, change, cheating, drinking, Hawaii, relationship. Bookmark the permalink.