We Thought We Were Going to Die

This is how our Saturday morning started yesterday. Saturday is my sleep in day so I had just rolled out of bed. And then the alarm went off on my phone. We live in Hawaii so it happens frequently. There is oftentimes flooding and flash flood alerts go off all the time. But it wasn’t raining and there were no storms in the area. Maybe it was a tsunami. Who could say.

I grabbed my phone and the alert said: Ballistic Missile Threat Inbound to Hawaii. Seek Immediate Shelter. This is Not a Drill. I had been texting with a friend and asked if she had gotten it. She had also received this message. We put the TV on and the same alert was coming across the screen. My significant other kept saying that the sirens were not going off. And that it must be an error. The radio stations were playing canned programming. Same with the TV.

I can honestly say, that I had no idea what to do. I had a friend who duct taped the door to their bathroom where they huddled with their family. 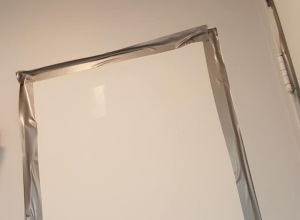 Does that work? Is that a thing? Another friend was at a baseball field with his son, while his wife and daughters were at home. He could not get through to them and did not think that he was going to be able to say goodbye. This was how real this was. It was real. For part of my morning yesterday, my family and I thought that we would not be around today.

I know that there are people on social media, poo-pooing what happened today and the reaction of the people of Hawaii. But with the news about North Korea and our President, it was completely believable. My son, who just turned thirteen last month, was saying things like “I’m too young to die.” And, I felt the same way. Clearly, neither one of us would be good in any type of emergency.

After minutes of complete and utter panic, I turned to Twitter. Say what you will about the platform, but it was where I found the first reputable source stating that it was a false alarm. Congresswoman Tulsi Gabbard tweeted out that it was not true. But, there was still ten minutes before that message even went out.

I admit, that I am a natural alarmist. I do not like the sirens. When they are tested at the beginning of the month, I have to stop and reassure myself that it is the beginning of the month. That there is really nothing going on. Now, when I receive those phone alerts, I am going to feel the same way. My family and I have talked about trying to come up with a plan in the event that something like this does occur and what we would do.

My son told me later in the morning, when it was clear that it was a false alarm, that he had come to terms with dying today. That he was happy to be together when it happened. And this just makes me ridiculously sad. That this is the reality of today. The reality of the times that we are living in. And the fact that I feel like a pawn in this Administration’s nuclear posturing.

I think that we will put some sort of plan in place, but with ten to fifteen minutes, there is not much of a plan to be had. Perhaps a better plan is to be more involved. Support candidates that can make a difference, both locally and at the national level. And I hope that no one ever has to live through what we did yesterday. No matter where they are.

Living like the rich and famous, splitting time between Hawaii and New York.
View all posts by nematomorph →
This entry was posted in family, fear, Hawaii, Relationships, Uncategorized and tagged fear, Hawaii, life, missile, relationships. Bookmark the permalink.